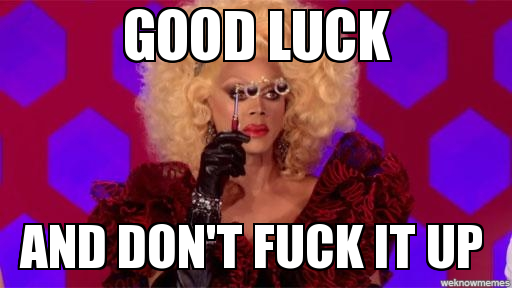 My obsession with RuPaul’s Drag Race happened fast. I was always thrilled when the show popped up on TV—I mean, these drag queens were lip-syncing for their lives—but when Season 8 came up on Netflix I drank it thirstily. Then I watched the season a second time, recruiting a friend who also couldn’t get enough, and now I have weekly viewing parties with other obsessed fans to catch up on all the seasons I’ve missed. Some of these fans are gay men who have been watching for ages. A couple are straight guys who thought they wouldn’t like it at first but now can’t wait to declare their teams in the first episodes. Most of us, though, are women, and there’s evidence we’re part of a much larger community of women and girls who have always loved drag culture.

That’s when the nightmares started. I’d be up on stage in some elaborate dress, thinking to myself, “This is the best that I can do. I tried the absolute hardest. I know this is a great look” and then RuPaul (who is appropriately often called Mother) stares me down and asks me how I dare come on stage looking like such a disaster, pointing out every flaw in my body and my outfit, sending me “home,” which on Drag Race is not a place anyone wants to go. In another dream, I was trying to tug a tiny bikini on over my body and I felt so exposed that I grabbed some sand and snow to cover my cellulite. The sand started turning into these huge bugs and by the time I got to the runway I had introduced a new species of cockroach to the planet from my horrible body and I would never be forgiven.

RuPaul with one of her girls

Naturally, when Queer Eye came up on my Netflix feed I jumped right into that, too. This show involves five extremely attractive men coming to the rescue of a (usually) straight man who’s doing it wrong. They help him improve his wardrobe, remodel his home, clip his beard, teach him to make a pretty appetizer, and then he gets the girl. It’s a total delight.

But one night I was watching with a straight man who had to turn it off because he was finding it so upsetting. I couldn’t imagine what was bothering him about the most soothing show I had watched in decades. He explained that all his life he’s got the message that he is not worthy of love if he dresses like a slob or doesn’t have a hot bachelor pad to lure women with. He’s been working hard to believe that he is enough because of who he is, not what he looks like or how much money he makes. And here’s Queer Eye’s Tan, the gorgeous sartorial expert on the show, explaining to a frumpy man about how his last partner left him because he “let himself go” and that now he never lets a day pass without looking like a million bucks to please his partner. I mean, welcome to life as a woman, am I right?

Which is when I realized the true reason women like me love RuPaul’s Drag Race and Queer Eye: we get to watch all of our traditionally feminine anxieties about having a perfect body, a perfect wardrobe, and being a flawless homemaker displaced onto men. We get to feel delighted by the runway looks on drag queens and then judge them savagely, shouting at the screen with a slosh of wine in the safety of our own homes. We get to consume the trappings of femininity we’ve always been sold while projecting the attending anxieties onto men’s bodies instead of our own.

Straight men like my friend, however, do not escape the cruelty of Queer Eye. Of course I found the show soothing—yes, please, let me watch hours of attractive men doing the emotional labor of gently explaining to a straight man what’s wrong with him. It’s the most cathartic of revenge fantasies.

Revenge, though, is never the path to healing. As my dreams suggested, displacing the anxieties of femininity onto men didn’t fully release me. I still identify with my favorite queens and feel with them when they are told they are not good enough. Just because Jiggly Caliente is a gay man underneath does not mean it’s okay to watch the other queens make fun of her for her weight and for having an eating disorder. Queer Eye may target straight men, but there’s a message for women here, too: at the end of almost every episode, the makeover gets him the girl. Right, of course, women are objects to be awarded to men, not humans in our own right. I forgot for a minute there.

Still, both shows have a certain heart that keeps me hooked. RuPaul is a fascinating figure who likes to confuse the meaning of gender. The best parts of the show are when the queens have heart-to-heart conversations over their makeup and tell vulnerable and relatable stories about identity and acceptance. Drag Race has been through a lot over ten seasons, and it has faced criticism for its moments of transphobia and fatphobia It has become a lot more politically sensitive since Season Four when the queens thought it would be hilarious to dress up as female presidents and act as stupid and racist as possible. The winner of that episode was in a futuristic dress, making the cynical statement that a female president wasn’t going to happen in our lifetimes.

I’m much newer to Queer Eye, but I do think there’s a huge amount of value in targeting straight men in the deep south who are cops, Christians, or self-described “rednecks” and introducing them to a group of gay men whose overarching mission does seem to be about connection. I like that these shows are confusing our narratives around gender and inviting contact and conversation across communities. Still, whatever our gender or orientation, we live and participate in a culture that values money, power, and gender performance. We may consume these anxieties in different ways, but they are coming for all of us.

So what am I going to do about all this confusion and anxiety? Get my friends of varying genders and orientations together, slosh a little wine, and watch the next episode of Season 10 of RuPaul’s Drag Race, of course.

Julie Peters is a writer and yoga studio owner in Vancouver, BC. She has an MA in Canadian literature from McGill University. Her first book, Secrets of the Eternal Moon Phase Goddesses: Meditations on Desire, Relationships, and the Art of Being Broken was published by SkyLight Paths in 2016. Learn more at www.jcpeters.ca.