Moana, a Disney film celebrated for its feminist message and criticized for its spotty cultural correctness, starts with the story of the demigod Maui penetrating into the body of the goddess Te Fiti and stealing her “heart.” As a result, the fish disappear and the coconuts turn black, threatening the survival of everyone in the Moana universe. Later, we discover that Te Fiti has transformed into Te Ka, a rage-filled fire monster who scorches everything in sight and does NOT want to be touched, okay?

This story might look familiar to survivors of sexual violence, like me. That’s pretty much what happens—after your body is violated, your creativity dries up, you push away anyone who tries to get close to you, and your anger seems to transform you into someone else altogether. It can feel like you’ll never be who you were before.

Not to worry—Moana, our heroine of emotional labour, is here to save the day! Te Ka faces down her perpetrator Maui, about to smite him with one last fireball, when Moana flashes the little green heart, catching Te Ka’s eye in the distance. Moana looks past Te Ka’s fireballs and soul-screaming and intuits that she is actually Te Fiti in extreme pain. Our heroine (voiced by Auli’i Cravalho) slowly walks barefoot towards the monster and sings: “They have stolen the heart from inside you / But this does not define you / This is not who you are / You know who you are.” These are stirring words (by Lin-Manuel Miranda) for survivors of trauma—words of hope and forgiveness and the possibility of retrieving something that’s been taken. Moana restores Te Fiti’s heart and allows her to transform back into the sweet fecund goddess she was always meant to be. Maui apologizes, Te Fiti gives him a look—notably without ever speaking a word— repairs his broken fishhook, and all enjoy a shiny happy musical ending. You’re welcome!

Interestingly, Maui is never positioned as the enemy in this film, even though he is the clear perpetrator of violence and destruction. His participation in righting what was wrong must be freely given, and only Moana seems able to convince him to help her of his own accord.

Perhaps the reason the ocean chooses Moana is that she is excellent at the sort of emotional labour that’s needed to get a huge jerk to do what you want without getting hurt. Throughout the film, Moana employs her super skills of intuition, listening, cajoling, placating, agreeing and being generally cute and non-threatening (not to mention tiny). These skills get her past her angry father, the demigod Maui, the fire-throwing Te Ka, and even the crabulous drag queen Tamatoa, who “loves bragging about how great he is” and can be distracted by a good listener asking the right questions.

Moana is especially well versed in a skill women have been cultivating since the dawn of patriarchy: agree with your father/brother/husband/priest in public where he has physical and social power over you, and then go to secret places with other women and make your own plans anyway.

Emotional labor has a long and complex relationship with sexual violence. Many women employ it as a way to keep themselves safe, to survive in when violence is threatened. Recent research has revealed that female animals from rats to chimpanzees to humans employ a stress response strategy called tend-and-befriend right alongside or often instead of fight, flight, or flee. With smaller bodies and young to protect, female animals must hone their social skills in order to survive. Human women in long-term abusive relationships, especially, get incredibly good at reading their partner’s moods and intuiting what he or she might need in order to prevent the explosion of violence. Moana does this over and over again in the film, not only to protect herself but also to heal Te Fiti’s violation.

Moana’s father, the chief (Temuera Morrison), is physically massive and quick to anger, at one point forcibly removing Moana from the boat she is trying to use to find more fish “beyond the reef.” Certainly, his intention is to keep her and the rest of his family safe. He is motivated by fear and loss, having seen his friend die on the reef, but this results in an inability to take a needed risk. It’s impossible for Moana to simply explain this to her father as if they were equals. So she doesn’t argue. She stays silent and lets him storm off. Then, in secret, she meets with her grandmother (Rachel House), the self-described “village crazy lady,” the witch or crone whose secret magic helps Moana in her journey. Moana finally escapes from the island in a moment when her father is distracted, and her mother shows up to silently offer her blessing and help her pack.

When Moana finally meets Maui (voiced by Dwayne Johnson), his first act is to steal her boat and seal her in a cave to die, all while singing “You’re welcome!”, the best anthem I’ve ever heard for male entitlement. What a lovable buffoon!

When Maui finally retrieves his fishhook from the scene-stealing look queen Tamatoa (the latest in a long line of gay Disney villains, voiced by Jemaine Clement), he is unable to work it properly and loses his confidence. Moana pleads with him, admonishes him, and finally intuits that he needs to talk about his feelings. She listens non-judgmentally to his story of having been abandoned by human parents and holds Maui’s pain and vulnerability with kindness. It works—Maui gets it together and continues to help her out.

Holding another’s pain is a skill that comes in handy again when Moana faces Te Ka. Te Ka is carefully never gendered in the film, and I am probably not the only audience member who didn’t notice and assumed Te Ka was male. When Moana sees the pain at the heart of the monster who is actively trying to kill her, she doesn’t turn tail and run. She sees and receives Te Ka’s pain and gently kisses the monster on the forehead. This moment provides a complex lesson. It’s true that our worst behaviours are often caused by pain, and holding space for each other’s wounds is vital in healing the layers of individual, cultural, and social traumas we hold in our bodies. When we offer kindness instead of retaliation, we can move past violence and access communication. That’s real. But if you are a teenage girl and your boyfriend is threatening to kill you and you know in your heart he’s a good guy but right now he has rage in his eyes, don’t stick around to give him a hug and tell him everything’s going to be okay. Run. The fuck. Away. 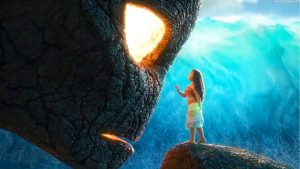 In many ways, this is a story about how the feminine-encoded skills of emotional labour can be a powerful force for change, perhaps especially for the men in the story, who have a chance to express and process their rage and trauma. In the utopian world of Moana, the men are not seen as enemies, they are rather recruited to help address Te Fiti’s violation. Her trauma can be read as a consequence of a violent patriarchy on the collective bodies of women as well as the metaphorical body of the earth in an era of climate change. Men must be a part of the solution: Maui must participate in healing what he hurt.

Nevertheless, our heroine is unquestionably Moana. How satisfying, at the end of this complex story of trauma, survival, healing, and resilience, to see her stride up to the pile of rocks her father and his father before him have built through the generations and place a giant, vagina-pink conch shell on top for her part.